21 predictions for 2021 by the Morrissey Goodale Team

As we get to the end of this craziest of years, here are some bold (some might say whacky) predictions from the Morrissey Goodale team for you to consider as you head into the holiday. And on that note, we wish you all a very happy Thanksgiving. Stay safe please.

It was another busy week for industry consolidation – with deals down just 4% over last year.

If nothing else, Washington is at least referencing infrastructure again. While a vast gulf still exists between Republicans and Democrats on what an infrastructure program should contain and how it should be paid for, the hope is that the next White House can create a reasonable degree of alignment on the matter.

Last week, President-Elect Biden said that his infrastructure plan, which we highlighted in last week’s issue, would strengthen the nation’s economic competitiveness and create millions of jobs. John Barrasso (R., Wyo.), the No. 3 Republican in the Senate and the chairman of the Environment and Public Works Committee, was recently quoted in the Wall Street Journal as saying, “[An infrastructure bill] would seem to be something that we can work together on in a productive way.” Democrats, like Rep. Kathy Castor (D., Fla.), the chairwoman of the House Select Committee on the Climate Crisis, see an infrastructure bill as one of the few opportunities to address climate change in Congress. In addition, House Speaker Nancy Pelosi (D., Calif.) said last week that infrastructure will be a focus for Democrats next year.

Discussions on another coronavirus relief bill will likely happen first, but could grease the skids for the passage of a subsequent infrastructure bill. 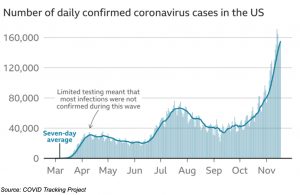 The four-week decline in first-time claims for unemployment insurance came to an end last week.  Weekly job claims were up from 709,000 the previous week to 742,000 last week.  On the bright side, continuing claims dropped substantially, declining 429,000 to 6.37 million— a new low during the pandemic. 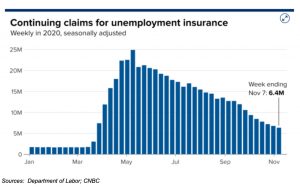 On Friday, Pfizer and BioNTech applied for an emergency use authorization for their coronavirus vaccine. It is the first vaccine to seek regulatory approval in the U.S. The companies reported that the vaccine will be available to high-risk populations by the end of the year. Phase 3 results of the vaccine began in late July and involved nearly 44,000 volunteers. The final analysis from the trial determined the coronavirus vaccine was 95% effective in preventing infections, including in older adults, and caused no serious safety concerns.