Last week, we celebrated our 16th year in business. Since starting the firm in April 2006 with just a couple of Blackberrys (still miss that keyboard and playing Brickbreaker), we’ve had the privilege of helping hundreds of AE and environmental CEOs and their teams. We’ve also been lucky to make more than a few good friends along the way.

Over the past 16 years we’ve learned a thing or two as we’ve assisted our clients grow during the very good years B.F. (Before Facebook), navigate the challenges of the Great Recession, ride the subsequent decade of economic recovery and expansion, and pivot through the pandemic to the here and now.

As we were drinking our birthday milkshakes, Mark and I thought it might be a good idea to share with you 16 lessons that we’ve learned over the past 16 years. I’ll do my best to share my thoughts here. But as you know if you’ve worked with us or read our stuff, the more valuable and meaningful lessons will be found in Mark’s article below.

The West’s awake! Six of ten of the nation’s fastest-growing states (Idaho, Arizona, Nevada, Utah, Washington, and Montana) are in the West. Our Western States M&A, Strategy and Innovation Symposium brings principals from those states and the other Western states of California, Colorado, Oregon, Wyoming, New Mexico, Hawaii, and Alaska together with industry execs and investors from all over North America. The symposium features sessions on M&A trends (including how the industry in the West is consolidating) and firm valuations. There are best practice panel discussions on strategy, innovation, deal-making, and firm integration. And there’s networking—so much networking! Space is limited to 150, so don’t delay. Register here to reserve your place.

The M&A beat goes on: Industry M&A is up 45% over the past 12 months. Last week saw two more transactions in the Western U.S. You can check all of this week’s buyers, sellers, and mergers here.

Consolidation nation? If you’re thinking there seems to be a lot of M&A activity this year, you’re right! This first quarter of 2022 has been the most active three months of industry M&A ever! Here are the 15 transactions announced since the beginning of the year that the Morrissey Goodale M&A team has helped make happen. If you’re interested in selling your firm, email Vice President Brendon Cussio at [email protected]. Or if you’re interested in our buy-side services, contact Vice President Jon Escobar at [email protected]. We’re here to help.

Questions? Insights? What have YOU learned over the past 16 years that you feel is worth sharing with the industry? Email Mick at [email protected] or text him at 508.380.1868.

Thanks, Mick! Without further ado, here are lessons 9-16: 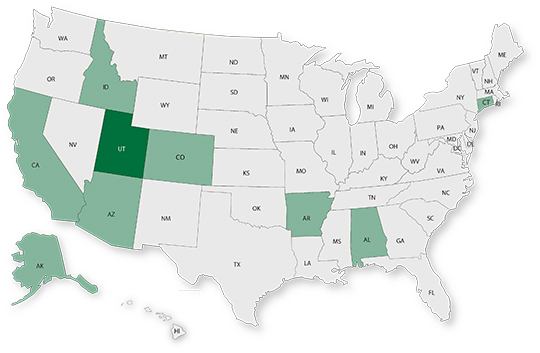 Economic health ranking: #4 out of 50

Overall tax climate ranking: #8 out of 50

In Utah, according to the ASCE, the infrastructure for levees and canals are considered poor or at risk but most categories are rated above the U.S. average. In terms of wastewater infrastructure, aging systems and new nutrient regulations are driving many districts to implement upgrades. The fast-growing population is also a significant driver for investments in overall infrastructure in the state. Utah will receive nearly $4.0 billion from the Infrastructure Investment and Jobs Act (IIJA) over the next five years, divided into the following categories of projects (additional funds may be deployed as federal grants get awarded to states):