The New (Public) Kids on the Block

The involvement by publicly traded AE firms in industry consolidation has been steadily declining since the Great Recession. But that dynamic changed last year with the arrival of some new players on the scene.

Soak up the sun in Miami this March! Our Southeast States M&A Symposium is taking place at the stunning Mandarin Oriental Miami on March 23 and 24. Connect poolside with over 120 (and growing!) AE industry executives, buyers, sellers, and investors in the nation’s most exciting city. The M&A market in the Southeast is so hot that we’ve had to increase the meeting space not once but twice and added outdoor networking and dining options. Register today to reserve your cabana in the sun. All this plus continuing education credits!

M&A up 34% year-over-year: The pace of industry consolidation over the past year is up 34%. This week there were 11 new transactions of AE and environmental firms announced in FL, IA, ME, NY, AZ, TX, NC, SC, and PA.

2021 M&A smashed records: Get all of the stats and trends in our 2021 AE M&A Year-in-Review Infographic here. Morrissey Goodale Vice President Jon Escobar provides his commentary on the past year and what lies ahead here.

Congratulations to our client PRIME AE Group (Baltimore, MD) (ENR #236): They announced the acquisition of Prosser (Jacksonville, FL), a planning and engineering firm that supports clients in diverse markets including the Department of Defense, transportation, healthcare, higher education, commercial, retail, and residential. We’re glad that our work for PRIME AE Group could help bring these two great AE firms together.

Congratulations also to our client FOX Engineering (Ames, IA): They announced their merger with multidisciplinary engineering firm Strand Associates (Madison, WI) (ENR #178). As a result of the merger, Strand’s Iowa office will be known as FOX Strand. We’re glad that through our work we were able to support the team at Fox Engineering in making this combination of two super Midwest firms a reality.

Questions? Insights? What do you see as the future of publicly traded AE and environmental firms? Email Mick Morrissey at [email protected] or call him at 508.380.1868 or connect with him on LinkedIn.

WANT TO GET THINGS DONE? WATCH YOUR LANGUAGE (PART 2)

Last week, you were introduced to the concept of making and securing reliable commitments. Here’s a recap:

• Over the next few years, production capacity will continue to be a fundamental constraint for the vast majority of AE industry firms. Reliability will separate winners and losers.

• Focusing on making and securing “reliable commitments” taps into how AE professionals are wired:

• Improving reliability throughout your organization requires the following: 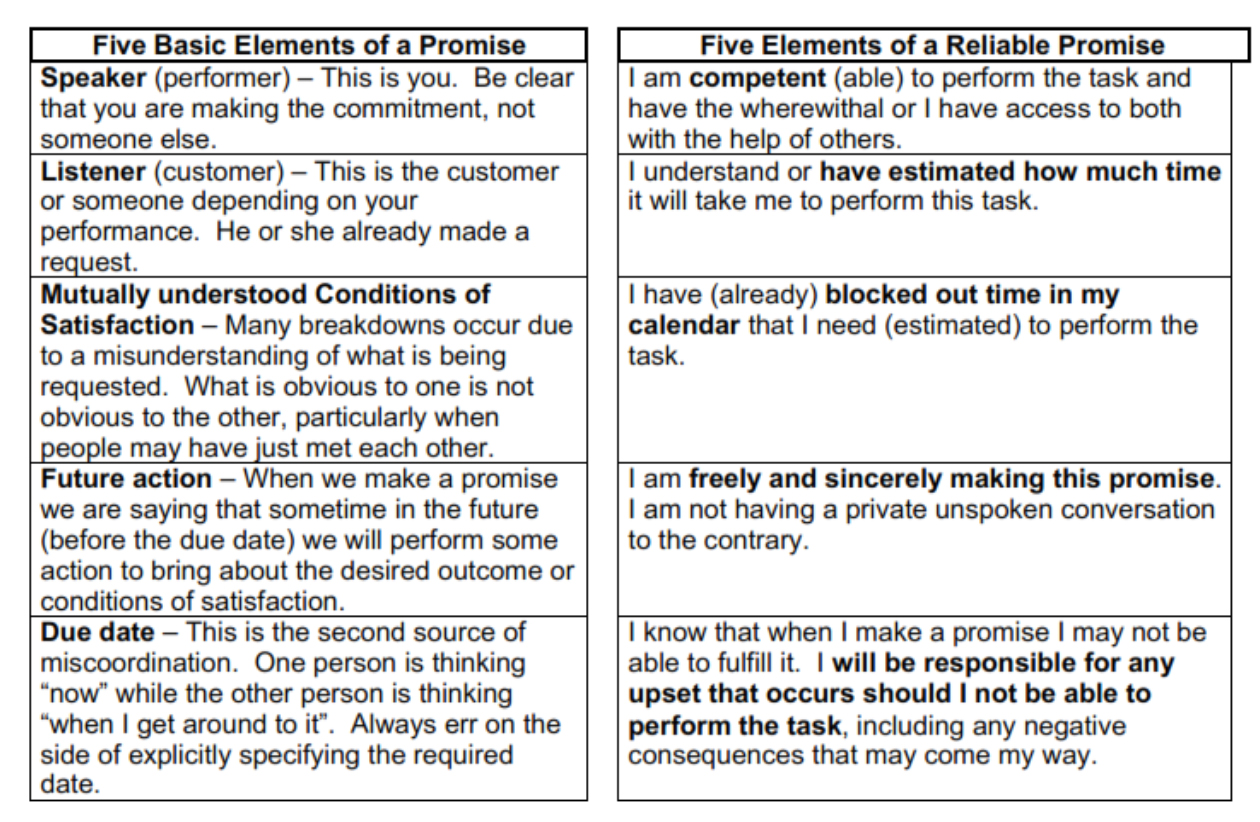 This week’s entry provides examples of reliable requests, how to detect when people are “waffling” on their commitments, reliable ways to respond to a request, and how to begin developing reliable commitment skills.

Let’s start with a simple example of a typical request:

What’s missing? Lots. For starters, we don’t know who the performer is. Maybe Joe is taking responsibility and delegating the task, but that’s not entirely clear. Also, what does “fixed” mean? Do we even know what’s wrong with it? Finally, there’s no timeline at all— not asked for and not offered. What are the chances Harry is going to be satisfied with the outcome? Slim to none.

Now for another example: 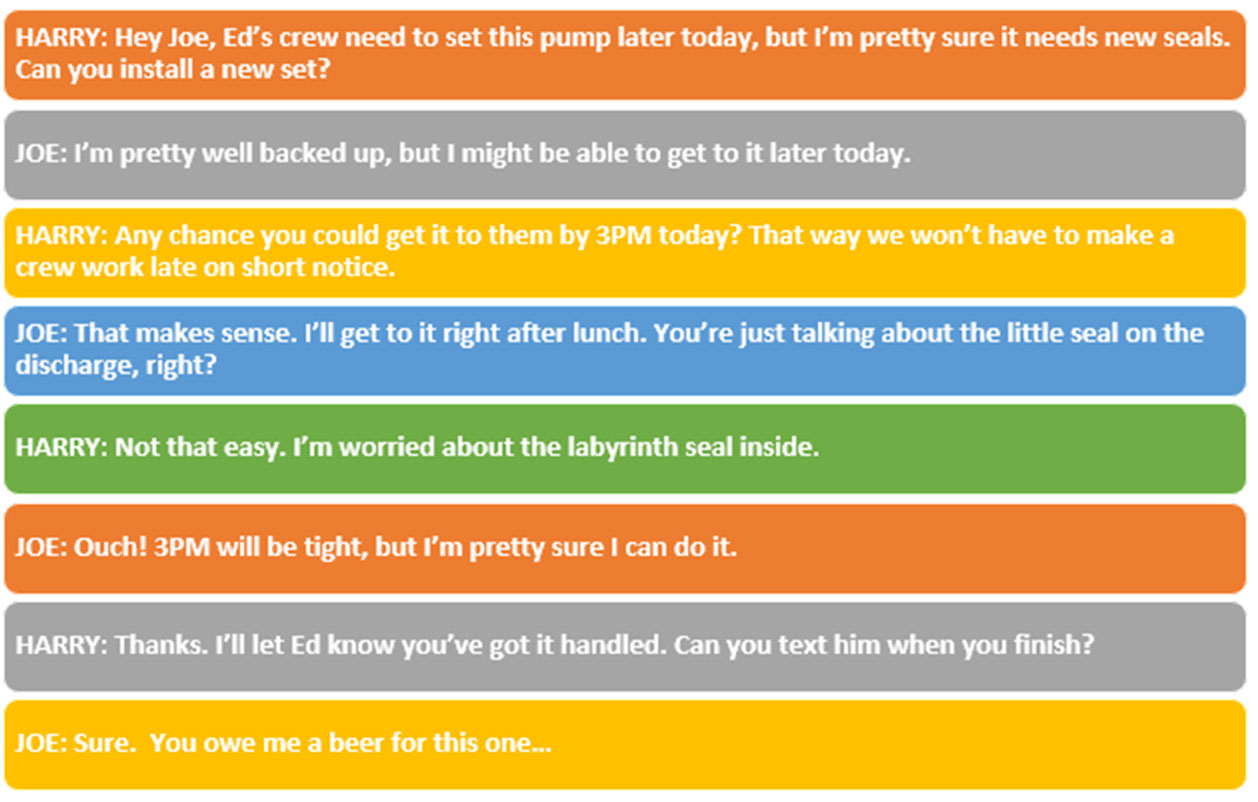 How does this request compare to the last one? For starters, we know Joe is the performer and we know Ed is the customer. Also, the conditions of satisfaction are clear, and so is the problem. The timeline is established, and Harry confirms that Joe will “declare complete” by texting Ed when he’s done. The chances this commitment will be kept are much higher than in the previous example.

Resist the urge to be overly optimistic at the first hint of agreement and diligently ferret out “waffles” (attempts to dodge commitments). To separate good intentions from promises and hopes from commitments, listen for these dead giveaways:

Hope. “Hopefully I can get to it tomorrow.”

Sometime. “I’ll have it to you sometime next week.”

Pre-recognition of excuse for failure. “This is a lot to get done by the end of the week, and I have four other projects I’m working on.”

Not blocking out the time. As the old saying goes, the dullest ink is far more reliable than the brightest memory.

The Six Ways to Responsibly Respond to a Request

As we make requests, we need to make sure performers can respond in one of these six ways so they can be responsible to their whole situation, which involves more than what is just going on at work. Doing this makes people want to be on your team.

1. Ask a clarifying question, not a stalling question
2. Decline (perhaps suggest an alternative in some cases)/promise no
3. Promise/say yes
4. Counter-offer (I can’t do that, but I can do this—sometimes it’s silly and it’s an attempt to stay in a relationship—we don’t give ourselves permission to say no)
5. Promise to promise later
6. Conditional—Yes I can do that for you, if…

How to Get Started

Begin by making observations about the conversations that are happening all around you. Keep a log for a couple of weeks and start training your ear by tracking 20 promises:

• They could be ones you make, ones you get, and some you observe
• Notice if all of the five elements of a promise are there
• Follow up to see if the promise was completed as promised
• Note reason for misses

By doing this, you’ll never listen to conversations the same way again. Start the exercise with a small cohort and get each person in the group to train two or three other folks. Rinse and repeat!

To learn more about how to improve reliability in your firm, call Mark Goodale at 508.254.3914 or send an email to [email protected].

Following the 3.4% annual level GDP decrease in 2020, the economy grew 5.7% in 2021. Last year was capped with a 6.9% growth pace for the fourth quarter, well above the 5.5% estimate. The increase was mostly driven by replenishment of inventories. The country’s economy can get a pat on the back for strength and adaptability navigating the pandemic, but this year, growth is expected to be moderate, especially in the first quarter. Apart from the recent COVID-19 surge, government stimulus have faded and interest rates are likely going up to combat inflation. Meanwhile, companies are struggling with the supply of materials and workers.

Americans softened spending in goods and services by 0.6% in December vs. November, the first decrease in almost a year. Results are attributed mostly to higher prices and the rise in coronavirus infections as more people stayed home. Though wages and salaries advanced 0.7% in December, rising inflation outpaced household income increases.

U.S. workers received 4% more in wages and benefits from employers in 2021, as adjustments were made to deal with the tight labor market and inflation. With 4.5 million people quitting their jobs in November, companies desperate to retain and hire posted 10.6 million job openings in December.

The Future Forum Pulse, a survey of 10,737 knowledge workers across the U.S., Australia, France, Germany, Japan, and the UK conducted in November, presented the following key findings:

Over the past couple of weeks, agencies have announced more detailed plans for how IIJA funds will be divided among states or allocated to specific programs. The DOT announced a $27 billion, five-year program to replace and rebuild as many as 15,000 bridges (see table below for top 10 states). The Army Corps of Engineers released a list of new and existing civil works projects that will tap into the $17 billion allocated for 2022. The agencies working with oil and gas producing states to address the issue of orphan wells (improperly sealed oil wells that can leak methane and other chemicals) issued a memo with the plan details and will soon begin to deploy $4.7 billion for closure and remediation work. 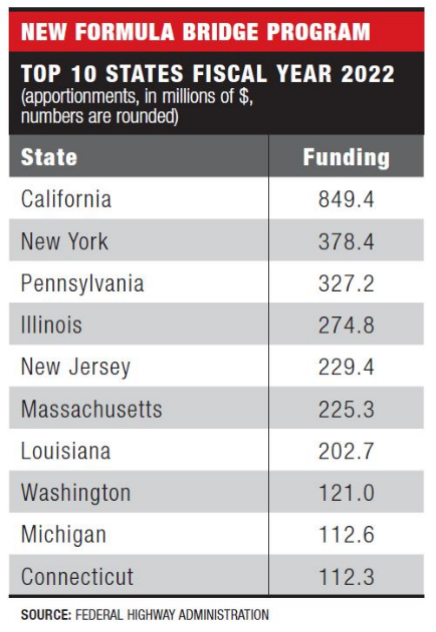