The title is a line from Hemingway’s The Sun Also Rises. In the novel, it’s a response to a question “How did you go bankrupt?” It speaks to habits (in this case poor ones) and their inevitable consequences. It’s the premise for that greatest of Gen-X questions “How did I get here?” (Released over 40 years ago!) But not all habits are bad. Positive habits – actions intentionally repeated – lead to wonderful outcomes. It’s up to A/E leaders to embody those positive habits if they want their firms to be successful.

M&A Update: It was all the “7s” this week in U.S. M&A – seven new deals announced and the pace of consolidation up 7% year over year. Is there any stopping this train?

Speaking of gradually then suddenly…: Early bird pricing for our upcoming CEO & C-suite VR Conference expires at midnight eastern tonight! Network and learn with CEOs, CFOs, CMOs, CTOs and CPOs (maybe even C-3POs) from around the country on June 9 and 10 in VR! This first-ever two-day themed VR Conference will focus on Strategy + Execution and M&A/Capitalization. Click here for early-bird registration pricing and for multi-attendee discounts.

Live and in-person October Texas M&A Symposium! Our M&A Symposium series is back live and in-person with our 6th Texas M&A Symposium in Houston this October 21 and 22. Join us as we host at the super sleek Post Oak Hotel (the ONLY Five Star Hotel & Spa in Houston). Network with A/E executives and investors from Texas and around the nation. Get the latest M&A trends, stats and best practices from industry experts, buyers, and sellers. We’re proud to once again partner with our friends at ACEC Texas on this premier industry event. Click here for updates and to be notified when registration opens.

Who we’re following on Twitter.  We can’t deny it. We like to follow (and listen to) Marketplace and their sister brand Marketplace Tech. Great for business, market and tech insights and info.

Questions? Insights? What changes have been gradual and then sudden in your business? Email Mick Morrissey @ [email protected] or call him @ 508.380.1868.

While the US economy continues to heat up, finding employees is the nation’s fundamental constraint. In April, the US economy added only 266,000 jobs, well below economists’ predictions of 1 million, and unemployment inched up to 6.1%. Concerns over safety and childcare, the temptation of early retirement, and stimulus checks as well as extended unemployment benefits appear to be contributing factors to the evaporation of the labor pool. The labor force participation rate (the percentage of the adult population either working or actively seeking work) reached 61.7% in April which is the highest rate in over a year. But prior to the pandemic, 1977 was the last time the level has been that low. Bank of America estimated that 4.6 million workers who would have been working before the pandemic took hold are currently in a holding pattern. The labor pool is expected to fill back up as the pandemic recedes, but it won’t reach pre-pandemic levels anytime soon.

First-time jobless claims fell from 590,000 (adjusted the previous week) to 498,000 last week, and were below the Dow Jones projection of 527,000. It is the first time claims have come in under 500,000 since the pandemic began. Continuing claims continues to hover just under 3.7 million. 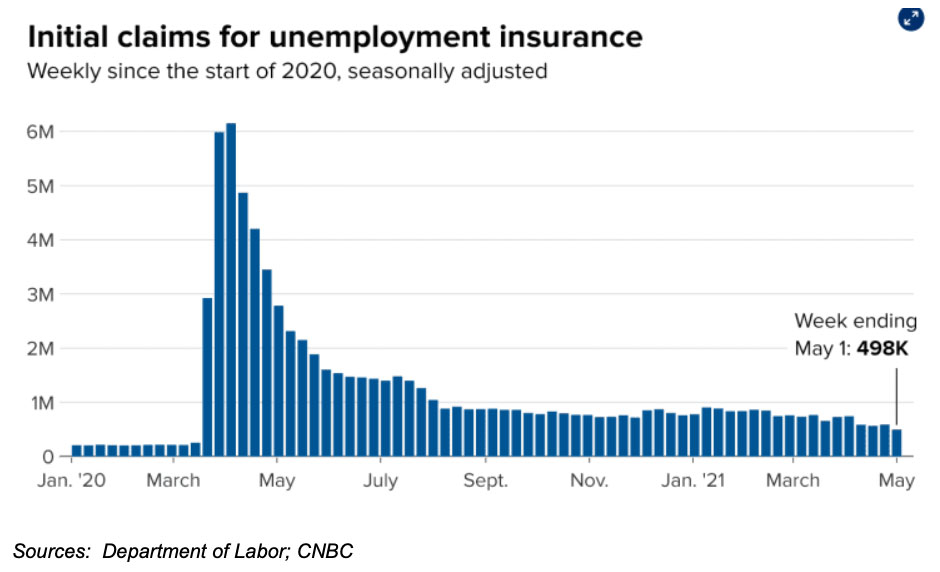