Make it a feature not a bug!

It’s a common refrain we hear from CEOs. They say they want their employees back in the office and in the field the way they were pre-pandemic. But then they pause, stare wistfully into the distance, and acknowledge that they will not be able to mandate that. And while that’s the right outcome, many are reaching that conclusion for the wrong reasons – and are missing a huge opportunity in the process.

M&A Update: The big news last week was the recapitalization of industry transportation icon TranSystems by Sentinel Capital. Our prediction of a record 20 recapitalizations among the ENR Top 500 looks spot on.

Why is Private Equity recapitalizing the A/E Industry? Why now? Get the answer to these questions and more in my conversation with Gerry Donohoe on the ACEC Engineering Influence Podcast.

Due to popular demand…..: We’ve received a ton of requests to expand participation in our VR events beyond CEOs. So we’ve opened eligibility for our next Virtual Reality Conference in June to CEOs and C-suite executives (folks who report directly to the CEO). This first-ever two-day themed VR Conference will focus on Strategy + Execution and M&A/Capitalization. Click here for early-bird pricing. (Re)connect and learn with your peers without the hassle and expense of travelling via fully immersive 3-D Virtual Reality.

Live and in person October Texas M&A Symposium! Our M&A Symposium series is back live and in person starting with our 6th Texas M&A Symposium in Houston this October 21 and 22. Join us as we host at the stunning Post Oak Hotel (the ONLY Five Star Hotel & Spa in Houston). Network with A/E executives and investors from Texas and around the nation. Get the latest M&A trends, stats and best practices from industry experts, buyers, and sellers. We’re proud to once again partner with our friends at ACEC Texas on this premier industry event. Click here for updates and to be notified when registration opens.

Who we’re following on Twitter this week:  We love to check in on John Kissinger, President and CEO of GRAEF. He’s a keen observer and commenter on the A/E industry, politics, sports, technology, and all things Wisconsin.

President Biden unveiled his $2 trillion plan for infrastructure and jobs, with a focus on roadways, railways and bridges, and clean energy. Transportation infrastructure will receive $621 billion, with $174 billion, or just over a quarter of the transportation portion, on electric vehicles. That includes 500,000 electric vehicle stations and replacing diesel transit vehicles and buses with electric vehicles. It would also provide for tax incentives and rebates for electric cars. About $115 billion will go toward road and bridge repair, including 20,000 miles of highways and roads, the 10 most “economically significant” bridges in the U.S. as well as 10,000 smaller bridges. Another $85 billion would be dedicated to modernizing transit systems and $80 billion for Amtrak improvements, repairs, and route extensions. Airports, ports, and waterways would also be included.

Continuing jobless claims dropped 46,000 from the previous week to just below 3.8 million. 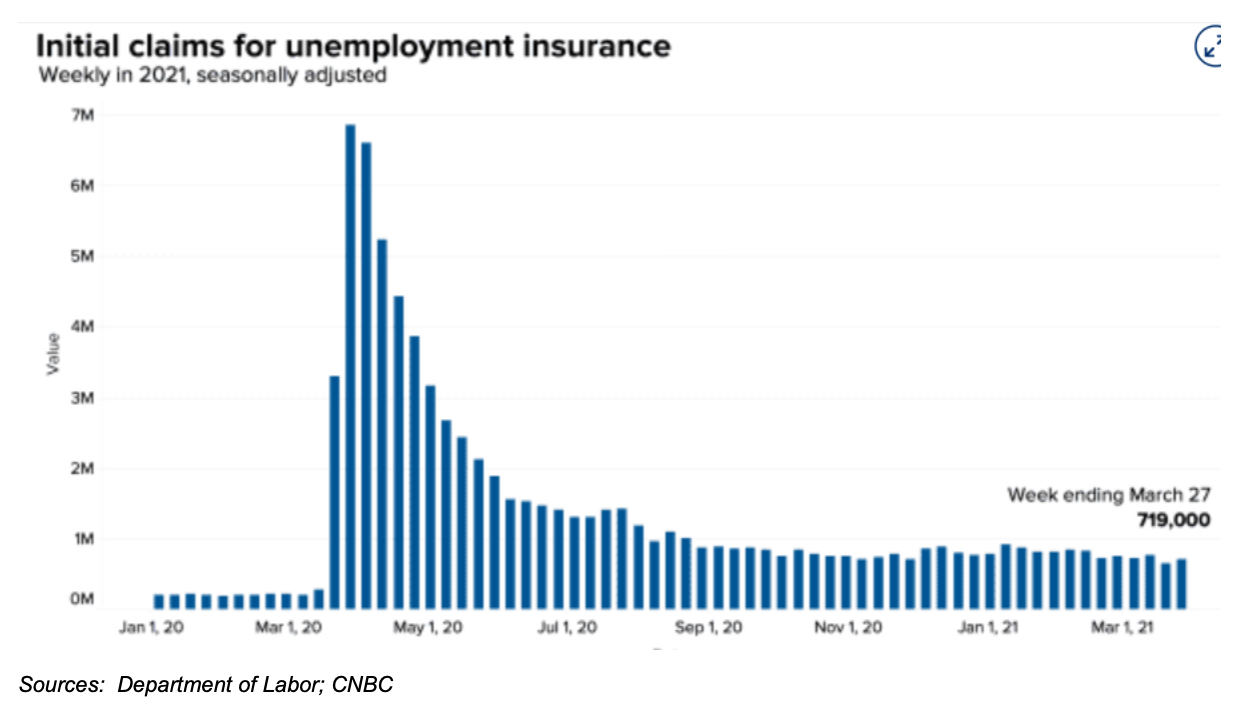 According to information collected by Bloomberg, 611 million doses have been administered in 150 countries, compared to 535 million doses in 141 countries the week before. The average number of daily doses increased to 15.3 million from 14.5 million the week before. The number of doses delivered is enough to vaccinate about 4% of the global population, up from 3.5% the previous week.