To be continued next week…..

M&A Update: This week saw another dozen M&A announcements. We’ll be breaking down all the trends and stats from last year in our 2020 M&A year in review coming soon.

Mark your calendars Part 1: In March we’ll be hosting the first ever combo Virtual Reality and livestream events for the AE industry. On Tuesday, March 23, it’s our New Reality: 2021 Edition and on Thursday, March 25, it’s our Q1 M&A Symposium.  Strap on your VR goggles to fully immerse yourself in the presentations and mingle with the team and the other attendees in our VR Auditorium. Or catch the livestream on your laptop. The choice is yours. To see reviews of our past VR events click here.

Mark your calendars Part 2: This June we’ll be hosting our third Virtual Reality CEO Conference with new content and features. Registration opens soon. Click here to be kept updated. To see reviews of our past CEO VR Conferences click here.

Questions? Comments? Suggestions for how all-employee meetings will be different in 2022? Ideas on whether Brady is the GOAT? Email Mick Morrissey @ [email protected] or call him @ 508.380.1868.

If vaccines can indeed turn the tide against the pandemic, consumer spending could begin to turbo-charge the economy as soon as April. There is significant pent-up demand for many services that have been put on hold in the last year. With an extra $1.6 trillion in savings and government aid, expect dining, travel, elective surgeries, and entertainment venues, like movie theaters, arenas, and ballparks, to come back strong. Even clothing will see demand as people begin to venture out more and more for both work and pleasure. Some sectors that benefitted from the pandemic, like grocery stores and auto manufacturers, will level off but remain healthy overall.

According to the Labor Department, first-time claims totaled 779,000 for the week ended that was below the 830,000 estimate from economists surveyed by Dow Jones and down from the revised number of 812,000 the previous week. It was the lowest recorded since November. Continuing claims also dropped by 193,000 to 4.6 million— compared to the pandemic-era peak for continuing claims of 24.9 million recorded back in early May. 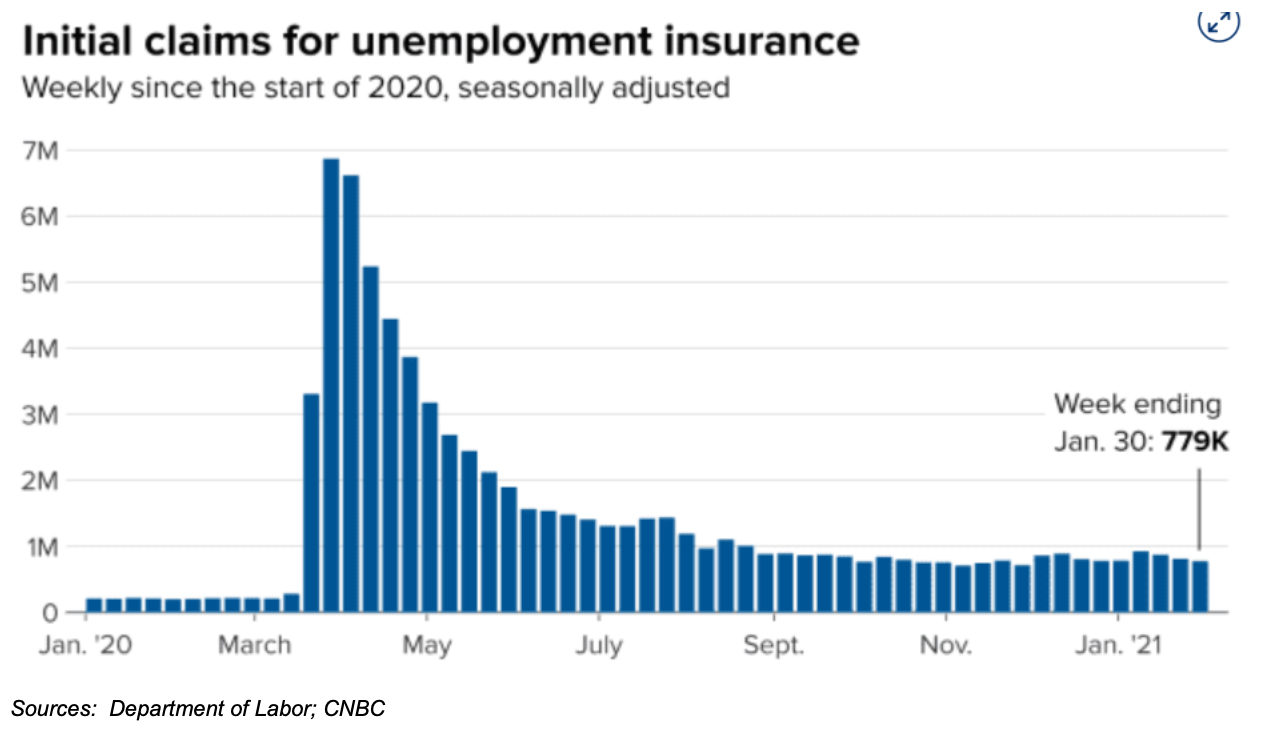 According to information collected by Bloomberg, 128 million doses in 73 countries have been administered, compared to 94.4 million doses in 61 countries the week before. The average number of daily doses increased slightly from 4.47 million to 4.69 million.