The screen writers for the 2020 season of “The A/E industry” delivered drama galore last year.  And 2021 is shaping to be more of the same. Many of the plot lines from 2020’s annus horribilis will continue to play out well into the new year.  And there will be new developments this season to keep us all on the edge of our seats. Let’s take a quick preview.

Everything is in place for 2021 to be better than 2020 for the country and the industry. But we should heed the words of the great philosopher Yogi Berra: “The future ain’t what it used to be.”

Given additional fiscal stimulus via the Democratic control of both Congress and the White House, GDP is expected to grow approximately 5% this year, meaning that the economy will surpass its pre-pandemic level sometime in the middle of 2021. And despite the spike in COVID cases, fourth quarter growth is expected to be about 4%.

Consumer savings levels dropped to 12.9% in November but are still well above the norm of 7.5%.  Savings levels for the year are at 16.7%— meaning there could be a spending surge in harder-hit sectors like travel and dining once the pandemic has receded.

For context, on July 17, the one-day COVID cases tally in the US totaled nearly 76,000 new cases. That was the peak for the summer spike. On Friday, over 300,500 new cases were reported. Unfortunately, fatalities have also been on the rise with more than 4,000 deaths reported on January 7. Arizona, California, and Rhode Island are among the hardest-hit places in the world at this stage of the pandemic, with the highest rates of COVID infections per capita, according to data analyzed by NBC News.

According to the Labor Department and CNBC, nonfarm payrolls fell by 140,000 in December against the consensus estimate for a 50,000 gain. Hospitality accounted for most of the job losses, as bars and restaurants took a particularly hard hit. Nevertheless, the level of permanent job losses actually fell for the month.

First-time filings for unemployment insurance dropped slightly over the past week despite the indicators that the labor market weakened at the end of the 2020. Weekly claims totaled 787,000 for the week ended Jan. 2 according to the Labor Department, beating Dow Jones projection of 815,000 and the previous week’s total of 790,000. 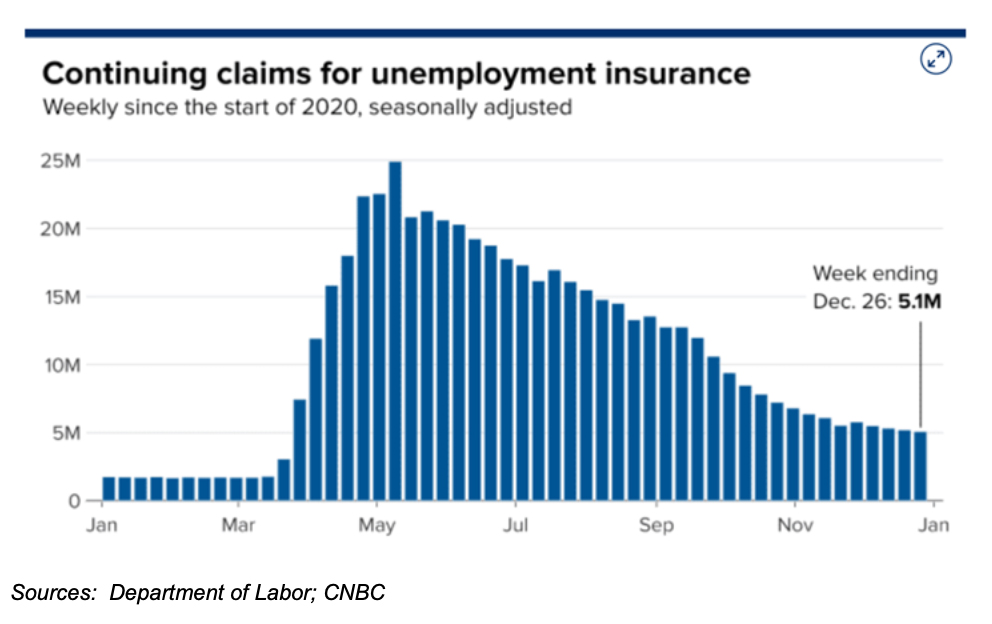 President-elect Joe Biden is planning to increase the amount of vaccine available to states by changing a Trump administration policy that reserved millions of doses that would be shipped when second doses were to be administered. The Biden administration plans to send most of the currently reserved doses out right away, meaning more people will more quickly get first doses. The Biden team is wagering that new doses will be manufactured in time to deliver booster shots within three to four weeks.

But beyond supply, disorganization and hesitancy to taking the vaccines have shown to be problematic in many places. According to the CDC, 22 million doses have been distributed, but only 6.7 million have been administered.

There is also a concern that if problems occur in manufacturing, booster shots will get delayed. Some worry that a weak immune response to the virus could actually pave the way for new virus mutations.

Whether manufacturing and distribution would be able to keep the two-shot regimen on schedule remains to be seen.