5 Steps to Sustain Firm Culture in a Socially Distanced World

The elusive infrastructure stimulus plan that many see as a no-brainer is nowhere in sight.  After some loud noises were made over the summer about trillions of dollars being invested in a massive and wide-ranging stimulus package that included infrastructure at its core, further discussion all but died off during the runup to the November elections. With a Democrat in the White House and a Republican-led Senate, the road to infrastructure spending won’t be a straight one.

COVID cases are on the rise again. The middle of July had been the highpoint of the pandemic in the US, rising to over 75,000 daily cases. Those numbers dropped to just over 25,000 cases by early September.  But now daily cases are eclipsing 120,000, and the upward climb is steeper than any since the crisis began.  Some of the larger states like Texas, California, and Florida are seeing daily cases rise again, thought they are still below their summer peaks (at least for now).  But in the Midwest and Mountain states— regions that were relatively spared through the spring and summer— daily cases have spiked significantly since September.

First-time claims for unemployment insurance dropped again last week.  According to the US Labor Department, 751,000 U.S. workers filed for benefits, compared with 758,000 the previous week— the third straight week claims came in at under 800,000.  For context, the week ending September 19 saw 870,000 claims.  Continuing claims fell for the sixth straight week, this time by 538,000 to nearly 7.3 million.  A little over a month ago, the number of continuing claims was 11.8 million. 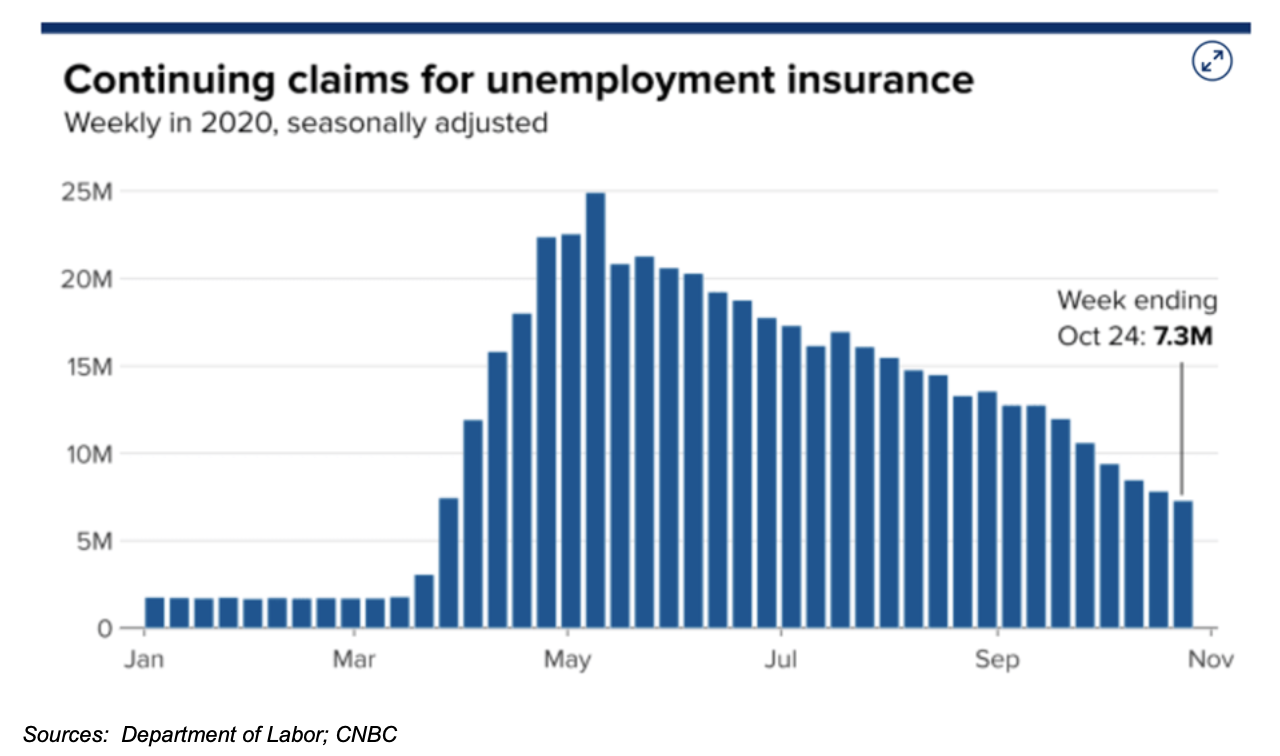 One of the three front-runners in the vaccine race now knows if its vaccine works and another is close to knowing. One hit the pause button. Moderna is in the midst of carrying out phase 3 trials of its Covid-19 vaccine, having enrolled 30,000 participants. The company should have enough data to determine whether its vaccine works or not by this month. The company stated that it would seek emergency approval from the FDA if the vaccine proves to be at least 70% effective. Johnson & Johnson is working on its single-dose vaccine but had to suspend trials in mid-October after a volunteer became ill. The company is gearing up to resume trials. Just this morning, the partnership of Pfizer and BioNTech announced its vaccine is over 90% effective cording to the first look at data from a late-stage U.S. trial involving nearly 44,000 participants. The company could supply about 40 million doses in the US before the end of the year if the data is positive and the vaccine meets regulators’ approval.