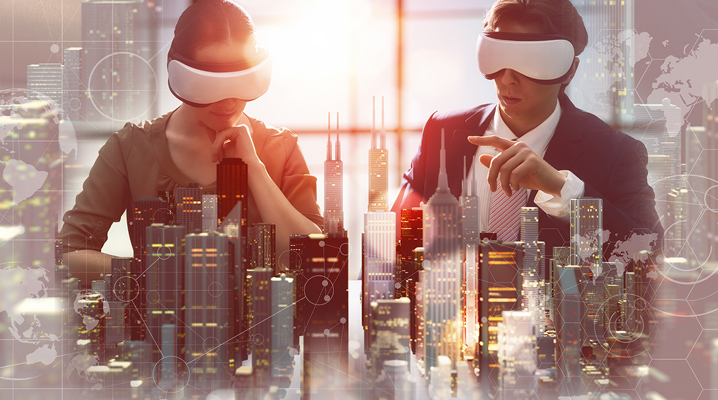 “…AND THERE ARE WEEKS WHEN DECADES HAPPEN…” REFLECTIONS ON CEO WEEK

We had two goals for our inaugural Virtual Reality/Augmented Reality (VR/AR) CEO Week. The first was to provide a forum for CEOs to meaningfully connect, engage, learn, and have fun with their peers at a time when they cannot safely do so physically. The second was to allow them to experience VR/AR technology so that they could see its potential in running their businesses during and beyond the pandemic.  Based on the CEO feedback that we have received, we’re encouraged that we achieved those goals and more.

We’re thankful to those CEOs who chose to explore this completely new format with us. Their participation created a unique forum that allowed for rich and deep conversations between peers, a renewal of old acquaintances, and the beginning of new relationships between CEOs (the latter was amazing and rewarding to watch unfold as real relationships were being built in VR). Here are just some of the highlights:

A frothy fourth quarter lies ahead for industry M&A. Buyers flush with cash are looking to snap up quality firms to help them navigate 2021 and beyond. Sellers are eager to get deals closed before this year’s tax rates expire. Join us for our 4th Quarter livestream U.S M&A Symposium on October 22nd and 23rd. Register live for one or both days to have the option to connect with buyers, sellers, and investors. Or choose to purchase the session recordings after the Symposium.

Deals are down 9% over last year’s record pace. However, after freezing over in the spring, the M&A market is red hot again. We’re thankful that our clients have trusted us to help them navigate and close 13 transactions this year, making us the #1 M&A advisor to the A/E & environmental consulting industry. Contact any of our M&A team to see how we can help you achieve your strategic goals through M&A.

Once again, I’ve used the Lenin quote for the title of this week’s message. Seems apt for the times we are in and for the week that was.

While hopes for Congress to pass a modern, multi-year surface transportation bill are all but dashed for now, extension of the FAST Act, set to expire on Wednesday, could bring state and local governments much needed relief from the massive economic implications caused by the pandemic. Last week, the House passed its continuing resolution, including the FAST Act extension, which is expected to clear the Senate and be signed by the President by the end of the month. Of particular interest to state DOTs is that a proposed extension is for one year, with an additional $13.6 billion added to the Highway Trust Fund.

According to AASHTO, the FAST Act extension within the CR provides:

While daily cases gradually declined from mid-July through mid-September, the last two weeks indicate the return to a slow incline, and the virus is reportedly mutating, according to a new study. The study did not find that mutations of the virus have made it more lethal or changed its effects, but it may be becoming easier to catch, according to the Washington Post. The U.S. is now averaging roughly 43,000 new cases per day, a 16% increase from a week ago.

Daily totals now average below 1,000 a day, dipping as low as 81 less than a week ago.  However, as children return to school with full-time and part-time schedules, another spike in cases could be on its way.

The number of first-time jobless claims was slightly higher than expected last week as the labor market continues its tenuous recovery.  According to the US Labor Department, initial jobless claims for the week ending Sept. 19 totaled 870,000, a slight increase from the 860,000 jobless claims recorded the previous week. Last week, New York and Georgia reported the largest week-over-week increases in initial claims. New York’s number jumped by more than 9,000 Georgia’s rose by more than 6,000.

Researchers have reported good news from an early clinical trial of the coronavirus vaccine being developed by Beth Israel Deaconess Medical Center and Johnson & Johnson. Early results from a Phase 1/2a clinical trial show it was well tolerated and even one dose appeared to produce a strong immune response in almost all of the 800 participants. Results indicate that 99% of the participants age 18 to 55 had developed antibodies against the virus 29 days after getting vaccinated. Most of the side effects were mild and resolved after a couple of days. The vaccine may require only a single shot (more work must be done to confirm whether immune responses will last without requiring a second shot) and is ready for a third and final phase clinical trial.  Johnson & Johnson will recruit 60,000 participants  to take part in the next trial, making it the largest clinical trial of a coronavirus vaccine to date.  If the vaccine is shown to be effective with one dose, it will have an advantage over those being developed by Moderna and Pfizer, which will be split into two injections about a month apart. In addition, the Johnson & Johnson vaccine does not need to be frozen and can remain stable at refrigerated temperatures for up to three months. Other vaccines currently in late stage clinical trials must remain frozen and will depend on a dwindling supply of dry ice for shipping and transportation.

National Institute of Allergy and Infectious Diseases director, Dr. Anthony Fauci, says Covid-19 vaccinations could start as early as November or December but says it may be late 2021 before things are back to “normal.”