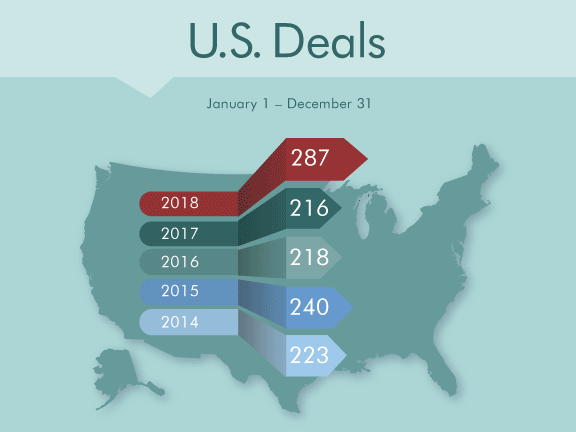 Morrissey Goodale tracked 287 US deals in the engineering, architecture, and environmental consulting industry in 2018 as compared to 216 in the prior year. While the number of industry transactions stayed fairly level from 2016 to 2017, 2018’s total represented a 33% increase over 2017, putting 2018 ahead of the previous high-water mark of 240 deals set in 2015. Over the last twelve months, a robust economy created broad-based demand for engineering, architecture, and environmental consulting services. This, in conjunction with more corporate cash available for deal-making via the Tax Cut and Jobs Act, drove the record-high number of transactions.

A review of the 2018 M&A stats also reveals the following:

California remained the hottest state for M&A activity in 2018, with a total of 44 deals.This represented a 41% increase from the 26 deals in 2017 and was partly driven by anticipated transportation infrastructure spending driven by higher gas taxes in the Golden State. Texas, the next hottest state, saw 27 deals. New York, Florida, and Massachusetts recognized 20, 17, and 15 deals respectively, making 2018 a record year for each state (Figure 2).

In 2018, inter-state deal activity (defined as a firm headquartered in one state acquiring a firm headquartered in another) accounted for 63.3% of all 287 US deals, indicating a healthy appetite among buyers for using M&A as a means of geographic expansion. In particular, buyers that are making deals across state lines are looking to California, Texas, Florida, Georgia, Massachusetts, and North Carolina (Figure 3).

With the core drivers of M&A activity still very much at work, we expect the number of deals consummated in 2019 to exceed 2018’s total across the United States.