The Road WarriorRanking the Best – and Worst – Airlines

As the coronavirus pandemic continues to dominate the 24-hour news cycle, it is important to recognize the significant impacts the virus and its coverage could have on your business. See Morrissey Goodale’s recommendations for what the leaders of A/E firms should be doing to control the situation for clients and employees within their firm.

Caveman mentality. Over the past two decades, numerous psychological studies have 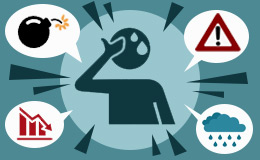 found that the human brain is hard-wired to focus on what is bad rather than on what is good. A negative image, for example, stimulates more electrical activity in the brain than a positive image. This negativity bias is an evolutionary vestige passed along from early hunter-gatherers whose vigilance concerning any threats allowed them to survive.

Bad results. In their new book, “The Power of Bad,” science journalist John Tierney and research psychologist Roy Baumeister detail how this negativity bias pervades all aspects of life, including in the workplace. An angry client, for example, has a disproportionately greater impact than a happy one. Same with a disgruntled employee. There’s little credit given for meeting a deadline, but a big price to pay for missing one. The lesson according to the authors: “Avoiding bad is far more important than doing good.”

Rotten to the core. It turns out the old proverb is true—one bad apple can spoil the bunch. The authors cite studies that have found that the performance of a project team doesn’t depend on the average abilities of its members but rather on the ability of its worst member. Negativity can be contagious and spread quickly, and even the presence of several stars won’t undo the damage caused by one bad employee. Although there is no foolproof way of identifying bad apples in the hiring process, rigorous interviews can help. If you have a bad apple in your crop of employees, the authors recommend quick action. Don’t force star employees to adapt to one person’s bad behavior. Intervene early, rearrange project teams if tensions develop, and don’t hesitate to fire someone who is a negative drain.

Rule of Four. The authors cite studies that have found a negative event or emotion usually has at least three times the impact of a comparable positive one. That means that penalties are usually more effective than rewards in improving worker performance, but it also means you can’t offset a mistake with just one action. Tierney and Baumeister advocate the “Rule of Four”— four good things are required to overcome one bad thing. That means, for example, that it will take four compliments to outweigh one piece of criticism.

Ranking the Best – and Worst – Airlines

Delta sky high. For the third consecutive year, Delta Air Lines has landed atop the 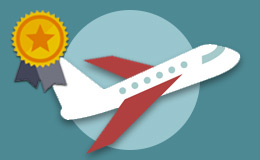 annual ranking of major U.S. airlines by the Wall Street Journal. According to the ranking of nine airlines based on 2019 performance data in seven different categories, Delta had the best performance in on-time arrivals, canceled flights, and involuntary bumping. Delta cancelled only 0.7% of its flights in 2019 compared to the industry average of 1.85%. Also scoring high were Southwest Airlines and Alaska Airlines, which tied for second. Alaska has been either first or second in the Wall Street Journal rankings since 2010, and for twelve years in a row it has had the highest customer satisfaction among traditional carriers, according to J.D. Power.

Turbulence at American. American Airlines finished last in the Wall Street Journal ranking for the third time in the past five years. The largest U.S. airline, which was plagued by an ongoing contract dispute with its mechanics for more than half of 2019, had the worst performance in terms of baggage handling, two-hour tarmac delays, involuntary bumping, and canceled flights. American involuntarily bumped 15,000 passengers in 2019 compared to just nine by Delta, and it was four times more likely to cancel flights than Delta. United Airlines was ranked next-to-last, its worst showing in five years, as it saw a rise in delays and cancellations.

Rank performance. The Wall Street Journal analysis also found that Southwest had the lowest rate of two-hour tarmac delays and Allegiant performed the best in handling luggage, while American performed the worst in those categories. Alaska had the fewest extreme delays, while JetBlue had the most. Southwest had the lowest percentage of passengers filing formal complaints, while Spirit Airlines had the highest. The Wall Street Journal ranking didn’t include other aspects of airline travel such as seat comfort, employee service, ticket prices, and add-on fees. 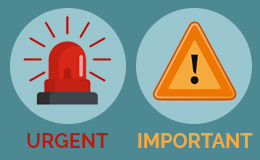 management tools, but often it’s not the most effective. To-do lists with dozens of items can easily overwhelm their creators, leaving them paralyzed in the face of an endless number of choices. Without any prioritizations or timeframes, important long-term tasks often languish undone because people are invariably drawn to simpler tasks that are more easily accomplished and offer the psychological payoff of crossing an item off a to-do list.

Prioritize – to the extreme. Frustrated to-do list users can improve their time management by employing the Eisenhower Method. This time management technique brings extreme prioritization to the to-do list by asking the following two questions of every action item: Is it urgent? Is it important? The method is named after President Dwight Eisenhower, who faced his share of tough decisions on the battlefield and in the White House and in a 1954 speech quoted a Northwestern University president who said, “I have two kinds of problems, the urgent and the important. The urgent are not important, and the important are never urgent.”

Four squares. “Urgent and Important” items, which include emergencies and short-term deadlines, should be taken care of first, perhaps at the beginning of the day. Working solely on items in this box, however, is a problem because it means you are in a constant crisis mode putting out daily fires. Most of your time should be spent on “Important but not Urgent” items. These should include both short- and long-term goals, such as business planning and exercise. “Urgent but Not Important” items include meetings, responding to e-mails, and phone calls. If you find most of your day spent on these items, delegate tasks or implement measures to minimize the interruptions preventing time being spent in the upper quadrants. Items classified as “Not Important or Urgent” are time wasters. Spend little time on them, and don’t hesitate to cut them altogether if they have no value.

Connect with decision-makers from both national and regional firms that are interested in expanding in the West.

Explore the topics most important to the future of your business with other CEOs, presidents and managing partners.

THE event for Texas AE or environmental consulting firm leaders, and firms that want to grow in the Texas market.